Meetings vs getting stuff done: 3 months since IA Summit 2014 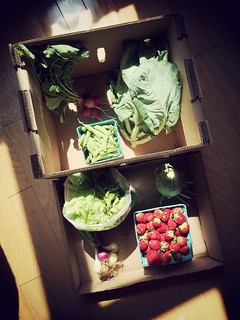 It’s summer! (Here in the northern hemisphere, at least.) Saturday was the first official day, but the weather’s seemed like it for quite some time.

A highlight in my summer is that we’re subscribed to a CSA—which means that, once a week, we get a mystery box of amazing produce. So far, we’ve received strawberries, radishes, greens, spring onions, and more. Our meal palates and palettes are very, very happy for it.

These last two weeks, the team has been focusing on each of our assignments. Getting the website closer, refining details that contribute to big ideas, and the like. Here are some specific things that have happened:

Meetings vs getting stuff done

All teams need to figure out their balance of how to get their work done (individually or collaboratively) and of how to tell each other about it. One thing we’re experimenting with now is how often folks meet and what happens during those meetings.

A tactic that’s working well for us is this: One person drafts a thing and others review it either or both:

It’s tempting to say that this works because of our particular circumstance: we all have other things going on in our lives and are scattered across six time zones.

I think, however, that mixing asynchronous and synchronous collaboration would be an effective way for us to work even if we were all co-located for eight hours a day, five days a week. It means that rather than folks having to hash out every detail together and coming up with a collage of a whole, we have a single holistic vision from one person, and then the team works to improve it.

We have 13 team members on the IA Summit volunteer team right now, including us three co-chairs. That is a huge number of people to gather onto a team in just three months.

I imagine that there will be a sprinkling of teammate additions the next several weeks. When they happen, I’ll be sure to let y’all know.

Be sure to get outside every once in while!

Designs, researches, illustrates, and writes code. Plays ukulele. Dances Balboa. Grew up in a geodesic dome, and hasn't gotten over it.
View all posts by Veronica Erb →
This entry was posted in Summaries and tagged ias15. Bookmark the permalink.

2 Responses to Meetings vs getting stuff done: 3 months since IA Summit 2014